delete all my pins

The Covid-19 crisis will unquestionably have major economic impacts. Unlike previous crises, the world is facing a slowdown and numerous health uncertainties which will impede a rapid return to normality.

Various segments of our economies will remain lastingly affected. The IMF now expects a global recession of 3% in 2020 and a rebound of 5.8% in 2021. Each month of confinement erases 3% of global growth and we do not expect a strong rebound in Q2. At this point, only China and India would narrowly avoid a recession. For several developed countries, the rebound will not allow a return to Q4 2019 levels, particularly because productive investment of companies, whose financial leeway will remain very limited, will be durably impacted by the containment measures.

To a lesser extent, there is some concerns regarding the level of consumer confidence in governments’ post lockdown sanitary measures, the deteriorated state of the labour market and, consequently, the resumption of normal consumption behaviours. Faced with these impacts, which for the time being are hard to quantify(the forecast are regularly revised downwards given the extension of the confinement period and a further deteriorating balance of risks), governments as well as central banks have acted quickly and strongly, in a coordinated manner, and will continue to adjust their bailouts to best preserve employment and protect companies.

In the United States, the contraction in GDP in the second quarter is thus expected to reach -35% on an annual basis, with retail sales and industrial production in March recording their worst month since 1992. The latest PMI figures released on 23/04 show a crisis of an, immediate magnitude greater than that of 2008. The composite PMI came out at 27.4, the lowest figure since these indicators have been calculated. Growth in 2020 is expected to be around -6% and rebound to almost 5% in 2021. 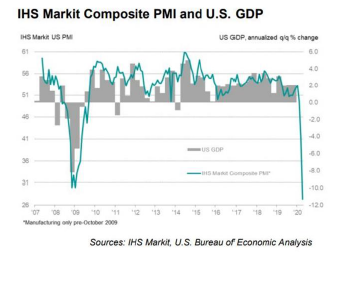 With regard to U.S inflation, a drop of 100 and 200 bps in core and headline inflation respectively in 2020 is plausible. The amplitude is substantial and notably results from the high level of correlation between this index and the price of oil, which has been free-falling; It also stems from the decrease in flight prices in march (the virus halted the airline industry). Nevertheless, this sharp fall in inflation will most likely be followed by a strong rebound, triggered by an increase in price levels across the aforementioned sectors.

In the Eurozone, PMI surveys recorded the sharpest fall in their history in March and are expected to fall even further in April: Italy is the most affected country, followed by Spain, France and to a lesser extent Germany and Ireland. The shock is expected to be much stronger than in 2008. GDP growth is estimated at around -7% for the year 2020 (rebound of 5% in 2021), which we believe is consistent with the leading indicators and, as a result of sectoral biases such as the weight of services in GDP, the Eurozone will ultimately be more impacted than the United States.

In this period of confinement, the consumer inflation basket has been totally transformed, to the benefit of food and to the detriment of leisure for example. However, the European Institute of Statistics ‘’Eurostat’’ recommends that national institutes do not amend the weights of the various goods and services which constitute this basket, and ensure that obtaining a price for each product, regardless of the information channel, remains a priority. Core inflation is expected to gradually fall to 0.5%, due to the decrease in the price index of the services sector, which will only be partially offset by food inflation; while we estimate that headline inflation will fall into negative territories from next month, for a period of one year. Inflation is expected to return to pre-crisis levels from April 2021 onwards.

The situation is significantly different in China since the confinement was ended as early as March (with the exception of Hubei and Wuhan, epicentre of the pandemic). The contraction in GDP in the first quarter thus stands at -6.8% yoy, a figure which must be analysed with some level of scepticism as difficult to reconcile with the macroeconomic data available to us. The deconfinement in this region, preceding that of developed countries, indicates that the recovery will be long and very gradual. Thus, retail sales fell by 16% YTD (as at the end of March 2020), highlighting the difficulty of Chinese consumers to return to a normal life. In addition, the collapse in global demand will hinder the recovery of the Chinese industrial activity for several months.

Emerging countries are particularly affected because of the conjunction of the health crisis, the slowdown in world trade, and the historic fall in commodity prices.

Back
Trends
Partager
Your country of residence :

La Française Group provides access to the expertise of a number of asset management companies around the world. To provide you with the most relevant information, we have developed an interface to present the full range of products available for your investor profile and country of residence.
Please indicate your profile
1
Country
2
Language
3
Profile
By continuing browsing on this website, you accept the use of cookies and other tracing devices s as to allow you to receive information suited to your profile, facilitate information sharing on social networks, guarantee the best browsing experience possible and to create statistics. To find out more, we invite you to consult our Privacy and Cookies policy. Find out more.