This document is directed at investment professionals and qualified investors (as defined by MiFID/FCA regulations).

However, charging them requires energy generation that usually emits carbon. But it’s possible we may be able to use hydrogen as a net zero emission fuel for transportation and industrial applications. Over the long term, hydrogen could help reduce carbon emissions and produce attractive investment opportunities along the way. 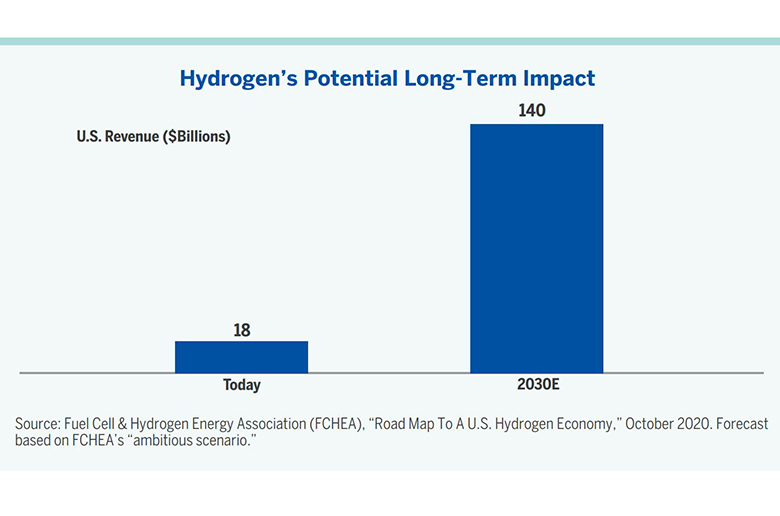 • Hydrogen has tremendous potential as a clean fuel. The Fuel Cell & Hydrogen Association estimates that the industry’s revenue could rise to $140B by 2030, multiples of the current level. Additionally, by 2050 that estimate is $750B, accounting for 3.4 million jobs and 14% of
final energy demand.
• But what is hydrogen? It isn’t a source of energy so much as an energy carrier like electricity. It is used in industrial applications but has huge potential in transportation. Currently, it is mainly produced from natural gas as so-called gray hydrogen. As a fuel source for trucks and buses, it eliminates tailpipe emissions and significantly reduces overall greenhouse gas pollution as compared to diesel or gasoline. So-called blue hydrogen, which captures carbon from traditional energy production, and green hydrogen, which is produced from wind or solar using electrolysis, can be net zero emission fuels.
• As the global investment in hydrogen increases by the day, there are more and more industry participants for investors to evaluate, from hydrogen suppliers to electrolyzer manufacturers to fuel cell manufacturers. We believe one interesting supplier is Air Products, which strives to capitalize on the hydrogen opportunity and has been a leader in hydrogen for quite some time.

delete all my pins
Your country of residence :

La Française Group provides access to the expertise of a number of asset management companies around the world. To provide you with the most relevant information, we have developed an interface to present the full range of products available for your investor profile and country of residence.
Please indicate your profile
1
Country
2
Language
3
Profile