What to expect for Chinese equity markets in 2021

As we are approaching the end of the year, it is time for us to stick our neck out and make some predictions for 2021, especially for our key investment universe that is China, which has been a star performer for the second year in a row (MSCI China gained 20.4% in 2019 and so far this year, as at 11th December 2020, another 23.3%).

The Chinese economy keeps on rebounding fast with a GDP growth in the third quarter of +4.9% YoY. November macro numbers were very strong, and all signs are pointing to another good month in December. But at some point growth will start plateauing as the post-COVID recovery of China has to come to an end. This plateau however may come later than initially foreseen as Europe and the US are fighting a difficult battle against the latest wave of infection. This is having a positive impact on Chinese exports. The same happened in the first half of the year when numerous European factories had to shut down.

Chinese exports jumped last month, from +11.4% YoY in October to +21.1% YoY in November in USD terms. China’s trade surplus was USD75bn in November (or USD63bn when seasonally adjusted), its highest ever. One can easily draw the conclusion that all the trade tariffs imposed by the US against China did not have much of an impact on Chinese exports, if any at all.

This staggering acceleration of exports seen in 2020 and that can be visually observed in the graph below cannot last forever, especially as COVID vaccines will be made available next year and as the world will hopefully return to a steady state. 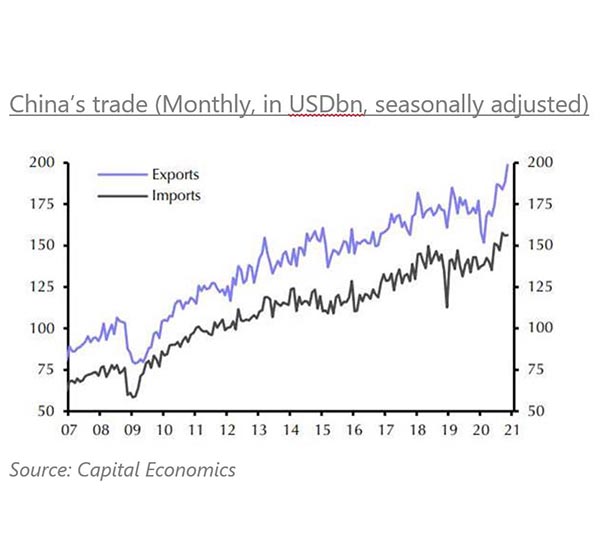 Li Keqiang, the Chinese premier said on 24th November that “[China] wanted to achieve a balance of trade and will absolutely not pursue a trade surplus”. This is telling us that China will likely not prevent its currency from appreciating if there is indeed further upside pressure.

Why would the RMB keep on appreciating? And what would be the impact on Chinese equity markets? It largely depends on China’s monetary policy on one hand and on the US’s fiscal policy on the other hand.

There is no clear consensus among economist when it comes to anticipating China’s monetary and fiscal policy in 2021. A minority of them believes that China should keep on running a loose fiscal policy as the economy needs further stimulation. The COVID crisis is not over, local clusters of infection still appear here and there, and certain sectors are still not fully back on track (transportation, hospitality).

Other economists seem to be equally split between those who believe in a status quo of the current monetary and fiscal policy stance and those who argue for China tightening in the first half of 2021. We tend to be more receptive to the latter camp.

Looking at the latest inflation numbers, we think there are reasons to believe in a forthcoming rise in interest rates. The consumer price index dropped to -0.5% YoY in November, but it was entirely driven by the very volatile price of pork and the high base effect a year ago when China was hit by swine flu. Pork price that is the largest component of the CPI index dropped by 12.5% YoY. In fact, core consumer prices are rising at the pace of +0.5% YoY. The production price index that is an indicator of CPI’s future trend rose by 0.5% MoM in November, its fastest acceleration since September 2018. In other words, despite misleading headline YoY numbers, inflation is indeed picking up in China, and is expected to accelerate further in the coming months. This will give reasons to the Chinese government to raise interest rates in 2021 which will help the trade surplus come down by pushing up the RMB. As an early sign, the Chinese government has already started pouring cold water on the overheating property sector by forcing the most overleveraged developers to sell inventory.
Why are we highlighting the US’s fiscal policy? Because the left-leaning policies Joe Biden wants to implement and that revolve around the fight against climate change and improving social welfare will most likely deepen the fiscal deficit of the US and be negative for the US dollar and provide further upside pressure on the RMB’s exchange rate. Whether Joe Biden will succeed largely depends on him taking control of the Senate. The answer will come from the state of Georgia on 5th January 2021. If he does, we can expect the RMB to steepen its rise in 2021 and China to attract even more capital, especially as China remains massively under-owned in the vast majority of investment portfolios.
The combination of interest spreads between the western world and China being at its widest ever with continued upside pressure on the RMB may push Chinese equities up for a third year in a row. An endless flow of liquidity looking for a home and driven by western Central banks’ unprecedented quantitative easing is the obvious other driver.
The MSCI China currently trades at 15.1x 2021 expected earnings when profits in China are expected to grow by 19.3% in 2021 (Source: Bloomberg).
Bloomberg consensus for China’s GDP growth stands at +2.0% in 2020 and +8.2% in 2021.

Informative Document for non-professional investors as defined by MIFID II. The information contained herein is issued by JK Capital Management Limited. It is provided for informational and educational purposes only and is not intended to serve as a forecast, research product or investment advice and should not be construed as such. The information and material provided herein do not in any case represent advice, an offer, a solicitation or a recommendation to invest in specific investments.  To the best of its knowledge and belief, JK Capital Management Limited considers the information contained herein is accurate as at the date of publication. However, no warranty is given on the accuracy, adequacy or completeness of the information. Neither JK Capital Management Limited, nor its affiliates, directors and employees assumes any liabilities (including any third party liability) in respect of any errors or omissions on this report. Under no circumstances should this information or any part of it be copied, reproduced or redistributed.